M: I wake completely enchanted and ready for another adventure. Despite the absence of my preferred American conveniences (unfettered access to tap water, vegetables), Cuba is gorgeous. Caribbean air is breezy, refreshing, and peaceful, though polluted.

Just after breakfast we meet Ivan, a Cuban who speaks fluent English. He proudly displays that his cell phone is in English and is eager to converse. He thinks highly of Americans, saying we are free and will always be free. I think of the Eagle on our passports and know that the freedom we enjoy is very different from the Cuban way of life, though the people are friendly and seemingly content.

“Americans are the mirror to society,” Ivan says. “We should all be like you.” His words are a sobering reminder that other countries hold America in high regards, despite the current political climate. We shake his hand and move on, his smiling eyes wishing us an adventure in his country. 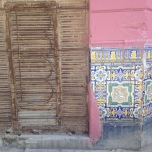 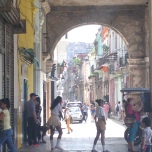 Still mapless, we cross a major street to a part of Havana not yet explored. The energy is more chaotic than touristy Old Havana with more cars and people on the streets. Small souvenir shops are replaced by strip malls with architecture from the 80s. Making our way back to Old Havana as a home base, “Hola, taxi?” is the question at almost every step from men. From the women, “Where are you from?”

“No gracias” becomes our mantra, we practically chant it walking down the street. My tattoos draw more attention than I anticipated. “Beautiful,” I hear, “Expensive?” It clicks. The art permanently on my arm connotes money, excess, spending on something beyond subsistence.

We settle on a cafe called La Luz for lunch. Our first choices are met with a “no, we do not have” to which I wonder on the point of a menu when you are out of half the items. This scenario is one we found at many of the government owned restaurants. A vegetable sandwich, salad, and two americanos later we are ready to leave.

“Maybe that hotel from last night will have a map,” I suggest. We’ve realized the map is our next necessary move since GPS and wi-fi are not accessible on our phones. The front desk does not have the prized paper we need, but we are directed across the street to a bookstore. We each buy a map, one of which I will somehow lose by the end of the night.

We take a minute to locate all of the recommended bars on our list, most of which we have either already visited or are quite a trek. We settle on the Polinesio in the Habana Libre Hotel and the Hotel Nacional, two recommendations that seem walkable (because when in Cuba, soak up the sunshine we don’t get in New York!).

E: Michelle and I lean over the map. We are still in central old Havana, plotting our route to Hotel Habana Libre, in the Vedado district some ways west of our vicinity. Michelle wants to walk. “It won’t be that far,” she says.

“It’s going to be pretty far,” I say. My fingers, marking our current location and our destination, are almost four inches apart on the map–I don’t know what the r:f is, exactly, but I know we’ll need a taxi back.
“Holà, taxi?” In old Havana, men approach us at almost every block.

“No, gracias,” we say, moving on. With Floridita as our point of reference, we move west, out of the historic center. The crumbling Spanish colonial architecture, in saltwater taffy hues, is beautiful in it’s decay. Street-level homes are converted into gift shops–with more leniency now on private businesses, Cubanos open their doors to the streets, offering trinkets and tokens, right from their family rooms.

Crossing Paseo De Marti (Del Prado), antique cars and motorbikes speeding, we come into another Havana, one much less touristy. We’re on a promenade of sorts, more government stores mixed with food stalls; locals crowd around the walk-up counters. We consider grabbing something to eat, but the street pizzas aren’t good (flavorless, dough-y), and the rest is unappetizing street-meat. The dual currency systems apprehend us–we know for certain that a street pizza won’t be $60, but our Spanish isn’t good enough to ask. 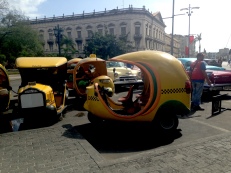 Hotel Nacional, our secondary destination, is on the water front; Michelle and I decide to cut north a couple of blocks and walk along the sea. Wind whips the ocean over the bulkhead, crashing waves over the stone street-guard, flooding the road. We’re a block from the waterfront, but the sea spray is so strong we turn back. Later, on the way home, our cocotaxi would divert several blocks out-of-way to escape the rising waters.

We’re tired. “I can’t wait for a cocktail,” I say. We’ve turned into another neighborhood, walking along a sidewalk, up a hill. Chickens peck through a fenced in back yard, among the overgrowth. Rising maybe thirty stories, the hotel stands before us, a dated glass-and-concrete high rise, like a trailor park in the sky.

M: The journey takes us back through the chaotic part of Havana and we jog to side streets for a quieter walk, all the while absorbing the buildings in disrepair. Poverty is real, but it is equal poverty, causing no air of inequality or injustice. After a few more cat calls and a walk that works up a thirst for daiquiris, we arrive at the Habana Libre Hotel, a hideous and tall structure with a mall in the bottom.

E: Once inside the stark lobby, we cross the marble floors to a help desk, where a woman addresses us in perfect English. “You have to see the hostess,” she tells us. She gets up from her desk, takes us over.

The young hostess is standing sort of in the middle of the lobby, holding a menu. “Polynesia?” She says. She takes us down a chrome-handled stairway, through glass doors that open to a sort of concrete portico. The bar is there, it’s tiki theme evident from its onset.

Inside, the space is dark. The windowless room offers no reference to time, creating it’s own experience entirely. The walls are round, lined with bamboo, like the inside of a hut. The low ceiling in the lounge is arced and thatched, realistic. I could be transported to another place and time, entirely, if not for the awful synthesized modern pop and a single crew of young locals in shorts and tank tops. Two men, dressed in pastel polos, finish drinks at the bar when we sit down. The space has so much to offer–the lounge behind us could be transportive, but instead feels like the mature Disney world of tiki bars.

Michelle has a daiquiri, but I order a mojito. The mojito begins first with lots and lots of mint–no bartender in the states would have used this much, but it was perfect, tamped down at the bottom of the glass, drowned in rum and granular sugar, the drink has a faint texture. Basic glassware, no miniature drink umbrellas. The scene has a lot of potential, but Polynesia should rethink their dress code, and their details.

M: Previously a Trader Vic’s, the tiki bar is still in tact and instead of offering an array of tiki drinks, it is a menu of blended beverages, as Cuba does. In Havana, replace the shaker for a blender and you’ve got yourself a bar. A round of daiquiris later, we opt for another rather than continuing our walk.

These daiquiris are tart, no where near as perfect as the ones at Floridita. We’ve now found the subtle differences in daiquiri balance. How different can a blended drink be from another? Very.

A stop at the Hotel Nacional is next. The grounds are large and we take the long way around, catching the massive waves breaking onto the road. It feels fancy, international, and is full of probably wealthy elderly British tourist couples. We aren’t feeling the vibe and would rather get back to Old Havana, the area that we have latched onto as home. We know it without a map, it has embedded itself in our impression of Cuba.