M: The men ask the table next to us about Hemmingway’s mojito spot and invite us along. Porque no? We join them, exiting Floridita like a jolly crew of newfound friends. We are told to walk seven blocks, turn right, and walk three more. “Leon loves to ask the same directions multiple times,” Ray leans in to tell me as the group is halted a few blocks into our journey. In fact, we stop a few more times, snapping photos while directions are re-confirmed, acting like the tourists we so obviously are. 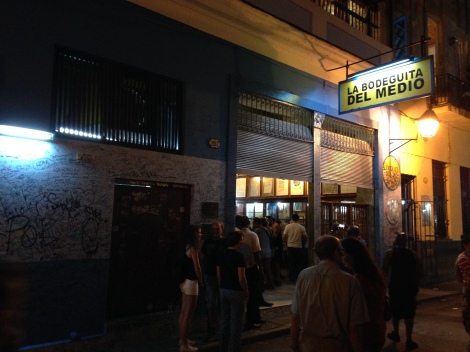 La Bodeguita del Medio is on a street that feels like an alley in the dim light. The transition from evening to night happens on our walk.

E: For a tourist-bar, La Bodeguita del Medio seems elusive on this dim street. It’s the single business open on this stretch of shadow (besides a small gift shop); light from the open bar illuminates the block. Patrons pore into the street with drinks. From the open doorframe, a bouncer mediates the crowd, motioning us inside when space is available. Too many people—there’s no space—but Leon squeezes to the front.

There’s a restaurant upstairs, but the bouncer says it’s full. “Guys, c’mon,” Ray says. He tries spreading his arms open in gesture but there isn’t room enough to spread out. “Let’s go back to that hotel, with the rooftop bar,” he’s playful, pleading. He steps outside. “We could be sitting down right now,” he says, “overlooking Havana.” He mentions there are internet cards for sale at the roof top, but Leon isn’t listening. He’s queued to get drinks, the famous mojitos rumored to have originated from this place.

It’s another Hemingway hangout, another tourist to-do, but unlike Floridita, from where we’ve just come, Bodeguita has a more youthful vibe, a casual dive-like atmosphere, with graffiti’d walls and no place to sit. The bar is over-lit, idealizing the ambiance of the street. There’s something communal here among the travelers; I’m into it.

Raj and Michelle are outside waiting, making their case for a move. But Leon’s mojitos are on the way. The bartender, working alone, preps his glassware with ice, sugar and mint, collins after collins lined up, like a wall between himself and the waiting crowd. He’s older, unhurried, leveling bottles of booze and seltzer. Behind him, the backbar is almost an unvaried display of Havana Club in different años. Cigars are also available; behind an open display is a group of ordinary—but random, in their context—liquors: Johnny Walker Red Label, Frangelico, Martini & Rossi vermouth… The only thing anyone’s drinking here is a mojito.

M: Ray gets restless and claustrophobic, as do I, but a round of mojitos is already on its way. Thanks to Cuban laws or customs, open containers are a thing and we sip the minty refreshment in the street with a bit more room than the crowded bar.

“These mojitos are delicious,” Leon exclaims, the overexcited tourist in every way. 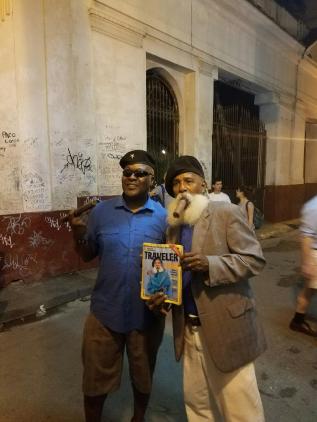 A Cuban man with a large white beard and an even larger cigar positions himself in the tourist area, commanding attention for his presence alone – but mostly for the cartoon sized cigar. Leon wants a photo with the cigar and ends up with the man’s hat on his head. “Here, hold this,” Ray hands me his drink in order to snap the photo. Leon’s straw is put in my left hand and soon Ray drapes his backpack on my shoulders like a coat rack.

Another gang of tourists repeat our actions with the giant cigar as we move on. The photos taken are examined until Tom zooms in on the magazine in the hands of the Cuban man. “It’s him on the cover of that magazine!” Suddenly the five CUCs (essentially five US dollars) for the photo makes perfect sense. He is a National Geographic celebrity making money from photo ops. 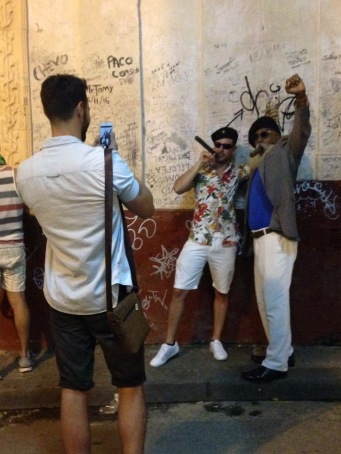 E: The rooftop bar that Ray had been referring to was at the top of Hotel Ambos Mundos, a 1920’s pink hotel in Old Havana that had been home to Hemingway for seven years.

Like all good things, there’s a queue. We’re far behind in line for the elevator, an antique operation of exposed ropes. The lift operator halts our group from joining the others, so we wait until he comes back down. Internet cards are available here—they’re 4.95 CUC in the lobby, but, as the guys confer between themselves, they’ve heard you can get them for cheaper. Tom and Leon each buy a card from the lift operator for 3 CUC. Once you have a card, there’s a complex login of letters and numbers, and, after you sign on, you’ve got an hours worth of internet. (Michelle and I would later buy a single card to share throughout our trip—connection at the hotel was more reliable on the rooftop than the lobby bar where we later had a daiquiri.)

We’re seated at the table for five. It takes us a while to order—most of the imported options listed on the menu aren’t available (On the occasion of our later venture to the lobby, Campari was available at the downstairs bar). The young woman serving us is friendly and engaging, but speaks only Spanish. Ray surprises us with his understanding of the language, interpreting that our server has a brother living in Miami who she’d like to one day join, but her Catholic father will disown her. Leon tells a story of taking pictures with another server, somewhere else, and how he’d offered to share the photographs. “She looked up at the camera behind her and said, oh, no, I can’t because the government is watching. We can’t do that.” But I have to wonder: did she just not want to give the guy her number? Through direct interaction with Cuba’s people, the government’s involvement with it’s citizens daily lives remains ambiguous, but we did see a trend of state-owned establishment employees being more distant and less engaging than those who worked for private restaurants.

M: On the table are two caipirinhas, two daquiris, and one Havana Club 7 yr rum.

“You could run a car on this!” Tom exclaims with the first sip of his caipirinha, “What is this, straight alcohol?”

Our group of relative strangers turns the topic to American politics. We share viewpoints, feeling lucky to live in the cities we do while so much is changing around us. The conversation reaches only a medium heat before Tom diverts us, “Why are we talking about this here? We are in Cuba!”

E: Our final visit to Hotel Ambos Mudos was a sun-struck, late afternoon at the rooftop. We gathered in pursuit of wifi and the final cast of daylight. A couple nearby drank piña coladas out of pineapples. How had we not noticed this before? We ordered two without hesitation. Inside the fruit was a pillow of foam, sweet and pulpy with a cake-like texture.

“This might be the best drink of our entire trip,” I said to Michelle.

Michelle got up to get spoons—we carved the remaining wall of fruit from it’s shell like dessert. The most perfect piña colada there ever was. 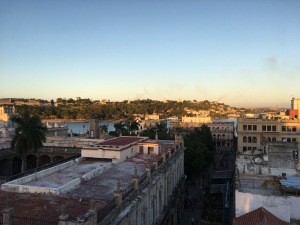 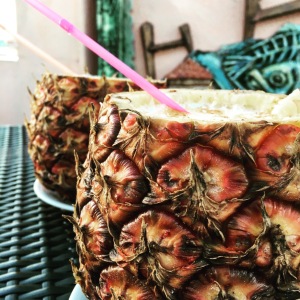