M: We cue for churros as two girls from Ontario speak to us in English.

“Where are you from?” they ask.

“You got here with your American passports?” they are astonished, jaws gaping. “How?” We explain Stay Bitter, that we are in Cuba to write about cocktails. The fried dough is warm and delightful, covered in chocolate and granulated sugar and comes in a paper cone, like most street food (including peanuts, chicharon, plantain crisps).

A few blocks more and we are in front of Floridita, the daiquiri bar known as a Hemingway haunt and one of the most frequented tourist spots in Old Havana. “Is it too early for a daiquiri?” When in Cuba, the answer is always no, it’s never too early.

E: Floridita is situated across from the Museo de Bellas Artes and a public square, where taxis wait for hire. Crowds swarm outside. It’s on everyone’s Havana hit list, this historic Cuban spot where the daiquiri is said to have originated.

Outside, in front of the restaurant, I meet glances with another tourist I’d see earlier. He’s tall, muscular, wearing an orange backpack. He comes over. “Hey, will you take our picture?” He asks. He’s with two other men—they’re all Americans. I line them up in front of Floridita’s signage for photos. “I’m Ray,” he introduces himself. His friends—who he’d just met and Cuba and had last night crashed in their hotel rooms–were Leon, a Nigerian expat who’s been living in San Fransisco for 15+ years, and Tom, who was chiseled and tatted and spoke up only when he really had something to say.

“We’re going in there for a drink,” Ray motioned behind him. “If you’d like to join us.”

“We’re actually headed in there ourselves,” I said. “I’m sure we’ll see you inside.”

M: As we enter Floridita, the request comes again, “Will you take our picture?” This time the group of five is our age, presumably American or Canadian, and with a table filled with glasses full, half-full, and empty. “Absolutely,” I snap the photo and we see Ray at the next table as he invites us to join them.

E: Leon gets up to get us a round—“You want yellow, or pink?”

“Yellow,” Michelle and I echo.

A band–men and women dressed in coordinating black and red–set up near the entryway. The first song stops the crowd—the woman singing, without a mic, is incredible, projecting over the noise of the bar and the whorl of blenders mixing batches of daiquiris. Couples get up to dance. Groups cheer from their seats. The dining room is over-lit with bright lights, but festive, celebratory.

M: Soon five daiquiris are on our table. It takes a few rounds of cheers for all five of us to pay attention at the same time, photos snapped by all. 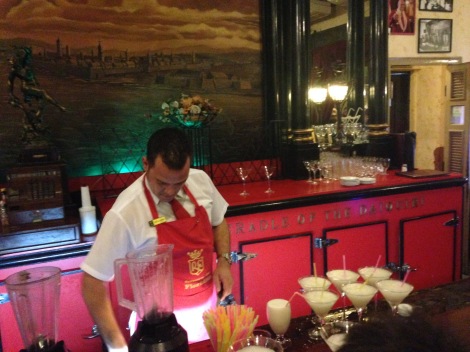 The daiquiris are blended in bulk, glasses lined up to be filled in mass. The balance of sugar to lime is perfect, the presence of rum almost imperceptible but visible as the alcohol sinks to the bottom more quickly than the blended liquids. It is the best (but not only) daiquiri we will have in Cuba.

E: On our last full day in Cuba, Michelle and I return for another daiquiri. Tuesday, mid-afternoon. Again, the place is packed. We score seats at the full bar, near the bandstand, where a statue of Hemingway leans in, as if to order a drink. Tourists rotate poses beside it, taking pictures. Cigarette smoke clouds the bright lights. The band performing is as equally good as the first night, but they come around soliciting CDs and asking for money, negating the feel-good vibes. On our final visit, we go for the strawberry daiquiri; a sweeter but just-as-strong likeness to the original. Plantain chips on the bar make for a perfect snack.

Behind the Hemingway statue is a gallery wall, with pictures of the writer and Fidel. We can’t say this enough, the place is super-touristy (there’s an actual gift shop selling memorabilia in the back corner of the dining room), but the daiquiris are actually that good. At 6 CUC, they’re one of the most expensive drinks we ordered throughout Havana.

About drinking at Floridita, the question is not, ‘Should we go?’ or, ‘When to go?’ but “Yellow or pink?”