E: We’d heard the stories, from a chef who’s business partner had beaten up the bouncer, to the numerous people who’d said their cocktails were great. When Michelle suggested we meet up at Pegu Club, on that ambiguous edge of the village, I said, “Let’s.”

Located in what looks almost like a strip-mall, the Pegu Club is up a flight of carpeted stairs. Dark, sexy inside, sleek with red highlights; they’ve made good use of the space. Perpetually in a dress, boots and blazer, I’m usually dressed for everything and nothing in New York. I question the suitability of my work clothes, but everyone else around is casual: jeans, tees, very American.

Service is prompt, attentive. I read over the menu, and the hype starts to melt away.

M: “I’m sorry we are being so indecisive,” Lizzie says to the bartender who has approached us twice. Our conversation that distracts us is the question  “do we stay or do we go?” We aren’t feeling the vibe in Pegu Club. Perhaps it is too early in the evening at 7:45, but nothing on the lists beckon or excite us. At a glance the cocktails are basic riffs on classics.

“It’s been on our hit list for so long,” I reason. Lizzie finds a euro and I conclude the side with the 1 fates that we stay, and the other side, we go.

It twirls on the bar and lands, determining our evening. “1 – we stay,” I concluded neither triumphantly nor dejectedly. I’m still unenthusiastic about the list and convince myself they must have a bartenders choice option.

“I’ll have the Pegu Club cocktail,” Lizzie requests.
“May I have something stirred with mezcal?” I ask. The man disappears to the other end of the bar and returns with mine. I leave it alone waiting for a drink to appear in front of Lizzie. The delivery is disjointed. The space feels in part hotel lobby bar and part cocktail den. “What did you end up making?” I inquire before the bartender could leave. His body language gave no intention he was planning on telling me the contents of my glass at any point.

“Do you want to taste it first?” he asks. I oblige, and smirk. “A mezcal negroni” he and I say in tandem. I nod, appreciatively. It always humors me when my open ended requests are my standard beverage.

E: It drinks like an adult orange juice; satisfying, but I only want one.

M: “Are you drinking the same thing as me?” a man approaches Lizzie. The answer is no, both drinks are simply in coups. “And my glass is empty,” Lizzie quips. As the man ushers in his friend it is clear the line was an attempt to engage conversation. Eventually the man reveals he is getting married on Saturday and out with colleges, all Spanish, who wanted to try to talk to girls but were too afraid of using broken English.

The engaged man asks a series of questions. “Where are you from?” “What do you do?” “Do you speak Spanish?” All questions have follow-up conversations with a genuine interest on all parties. The Spanish man holds his own with English and the remaining three of us continually chide ourselves for needing to learn more Spanish. 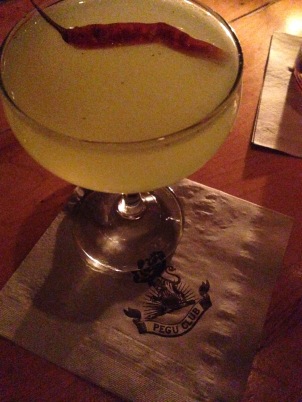 “Your pronunciation is perfect,” the Spanish man tells both Lizzie and I at separate times. He pulls me into a conversation, forcing me to butcher my way through some Spanish sentences. Mostly I say “como se dice” over and over. The men buy us a round and I end up with a thai chili pepper floating in a mezcal drink, it adds just the right element of heat. I request a negroni for Lizzie, knowing that is her next move as she and the engaged man chat about event planning.

The engaged man shares the story of how he met his soon-to-be-bride. It is captivating and humorous; he shares his vulnerability as a single man attempting to pick up a woman in a bar. It worked and he is clearly happy with his choice. “How is it for you two?” he inquires on the single saga post-dating apps. “You shouldn’t have a problem. You girls are lucky that you’re both pretty, because if you weren’t, no one would talk to you.” He means at bars, but the phrasing makes us both burst into laughter.

E: Here it would be useless to relay the conversation between the Spanish Chef and myself. My Spanish is limited, one-dimensional, perfectly pronounced. His English vocabulary is expansive, by heavily accented.

The Spanish man has moved on to Lizzie, I assume also squeezing some Spanish out of her. The engaged man asks me what my worst date experience is and I relay a story of a Hinge date with mismatched enthusiasm and one of my favorite stories of a man who attempted to ghost me yet I continue to run into him all over the city all most every month. The engaged man is amused and shares his own previous stories, then giving me dating advice, which I take to heart.

E: But what’s the point of talking, anyway? He kisses me, and like teenagers who’ve never been in a bar, we make out.

M: I excuse myself to the restroom. “Shelly!” Lizzie calls out; we meet unintentionally in the two-stall room and conclude we are done, tapping out for the night with smiles on our faces and laughter in our eyes.