Affront the dark green facade, and original window detailing, are six cafe tables at Dante. I relax into the only vacant seat. Beside me: an argument, in French, between father and son. Opposite, on this south end of Macdougal, are pretty row homes, glaring in the strike of setting sun. “Hey,” a server greets me in passing. She opens the door to ferry soiled dishes inside. The chorus of Bad Boys drifts into the surrounding chatter of foreign patrons. It all feels distinctly New York beneath this wide green awning—even among the tourists, I could be no where else.

Like many things west village, Dante grips to it’s history. Opened in 1915, when Greenwich Village was predominately an Italian neighborhood, Caffe Dante operated for 100+ years. It closed last March. Now, revived under the ownership of an Australian, the current version is said to be an echo of the original. Neo-retro details include scrubbed subway tile, pressed tin ceilings (original), leather banquettes, in white. It’s bright inside, an all day affair. Dante opens at 8:30am.

The highlight here is “The Negroni Sessions.” A 4-7pm beverage menu that invites the European tradition of an aperitif—historically a bitter cocktail to open the palate—before dinner.

The on-tap original is tempting; I resist. The second most popular option, the server says, is the Negroni Bianco, made with Brooklyn Gin, Quinquina Aperitif, Alessio Biano and lemon bitters. Served up, it’s as lemony yellow as the classic is Campari red. Garnished with a sprig of baby’s breath, the Bianco is beautiful, bitter and floral, with a subtle citrus undercurrent. A solid interpretation of the original.

The Lavender Negroni (Citadelle, Gran Classico, Cocchi Americano Rosa, Saline) is appropriately aromatic. It’s all lavender up front, then smooth, approaching sweetness at the finish. Saline tempers the herbal complexity, drawing forth the sweeter notes. Garnished with lavender, it’s served on large cubes in a pretty tumbler, as elegant as it is herbal.

There is sweetness among them–the Chocolate Negroni. On the rocks, it resembles it’s predecessor; there’s an orange wedge instead of a peel, and the ice cubes are flecked with chocolate. But to taste: take two of your favorite things, put them together. Bitter. Sweet. The tongue technically interprets these flavors in opposite succession, but this is how I receive them: bitterness, first from the aperitif, and then from the cocoa. Bitterness, for me, always curtails into a sort of sweetness; the drink is perfectly balanced. I have a second.

While no longer the historic stronghold it once was, the current Dante offers much to newcomers: a shaded sidewalk, a varied crowd, the perfect aperitif. Cheers. 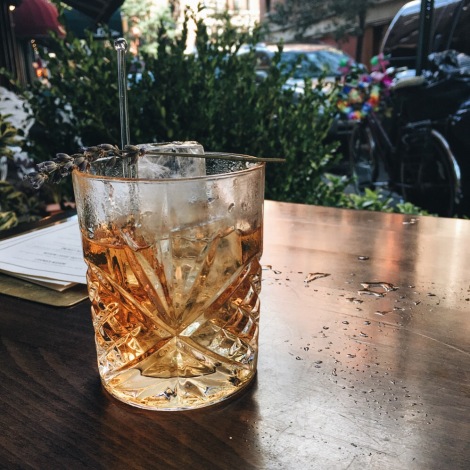 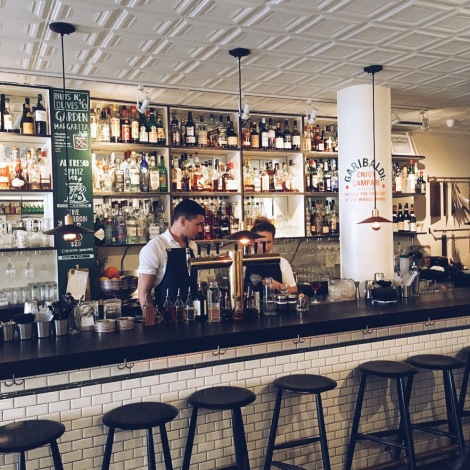 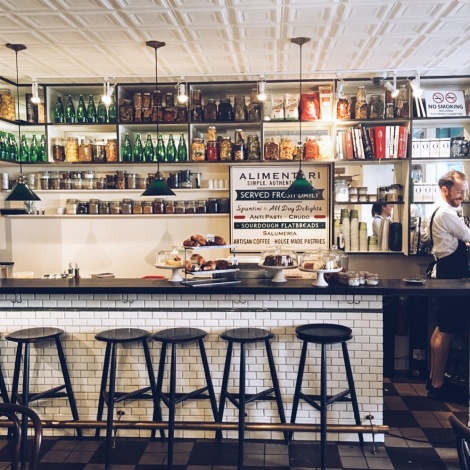