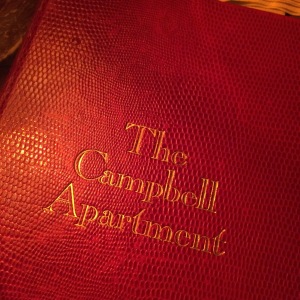 I come into the Campbell Apartment late on a Tuesday night. Still before midnight, the space’s seating is mostly full. There are only a few stools at the bar, and one is available. The hostess allows me to show myself over.

Old school jazz plays at a noninvasive volume; the low golden lights are ambient and eternal, taken from another era. Everything is superimposed to recreate the 20’s: the prohibition-style elevator entrance (on the southwest edge of Grand Central); the staff uniforms (white jackets and waistcoats for men, women in black cocktail dresses and opera-length pearls). The details pay great respect to the space–originally the office of tycoon John W. Campbell.

Even the cocktail list summons the ghosts: The Flapper’s Delight (champagne, papaya juice, Amaretto); Roaring Twenties (rum, ginger liqueur, grenadine, fresh lemon juice); Barry Royal (champagne, fresh berry juices, maraschino liqueur), all for $18. I skim over these house specialties–there are two house punches, in addition, $22. This is a place that calls for a classic cocktail and so I go where I almost never go wrong: the Negroni.

“Up or on the rocks?” The bartender asks.
“On the rocks,” I say, recalling the single incident where I’ve had a Negroni served up (at Molly’s Pub and Sheeban, of all places, on 3rd Avenue).

Beside me, a man and a woman on a date. Her handbag is the shape of a rotator-dial telephone, slumped on the bar. She’s detailing how “they thought [she] was autistic,” and he’s telling her about his ex-wife. How did they end up here? On my other side: two guys, my age-ish, suit jackets slung on the backs of bar stools, glances idling in my direction. We are in the perimeter of the oui hours, and so I disregard them.

The bartender shakes a tin over his shoulder. I cut my eyes at him. He slaps it open on his wrist. Maybe he has other orders to make before mine, I think. But onto the rocks he strains the cocktail–Campari red, garnished with an orange slice and not a proper peel–yes, that’s my classic cocktail, now before me in a pretty glass.

It may as well be a $17 glass of rainwater. Gone is the complexity of the gin, the bite of Campari; only the ease of sweet vermouth lingers. A watered-down rebuke.

The space is too pretty not to swivel around and look at. It’s cavernous in a cozy way, the carpeted floors; vaulted ceilings with an ancient painted pattern; the fireplace, gated, in the dark; tartan curtains; leather seating; the mezzanine overhead, inaccessible now. Hard to believe this historic stronghold–complete with implemented behavioral policies and observed dresscode–is coming to an end of the month. After losing the bid for their lease, MTA will evict the group at the end of July. The space will still operate as a bar, but even the smallest changes in lighting will kill away it’s charm.

Of course, if they keep serving Negronis out of a shaker, a little change might not be such a bad thing.