It was our first date, and we couldn’t decide where to meet for drinks. “There’s always Little Branch,” I said.

Little Branch, in my experience, is a setting for romance. Although I have gone with groups of friends and former boyfriends, it had not inspired me to go there alone until now. The interior of Little Branch lends itself to such conclusions: you should have reservations, first of all, or you have to gather grace from the door guy. Downstairs, past the nondescript facade, the stairway lets into a small gathering area with about six seats, divided among the perimeter. The small bar sits back between angular walls; standing room only. To the left, there is the host desk, and the piano. The bar is candlelit and sexy, meant for close conversations, intimacy. In the lounge, there are various size booths, but seats for two dominate.

On a Sunday evening, I go alone. There isn’t a doorman, and they don’t have live jazz. The music is vintage, sultry. There are a few people here: men, mostly, hanging out by the bar. Tables are empty. It’s early yet. 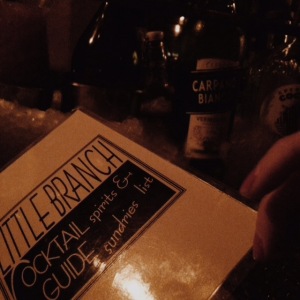 Sidling up to the bar, I slip off my leather jacket and fur vest. The bartender hands me a laminated booklet: Little Branch Cocktail Guide, Spirits & Sundries List. Inside, the first page suggests classics like a Bennet or Moscow Mule (made with house ginger beer), ending finally with Bartender’s Choice. “Leave it to the professionals,” the description line reads. Pages of bespoke suggestions and available spirits follow.

My first choice is the French East India: starr rum, pimento dram, ginger, lime, dark rum float, served tall over crushed ice with an orange half-wheel. Smooth and almost fruit-forward, there’s a punch of lime before sliding into a hint of spice on the back palate. My lips tingle from the pimento, calling for another sip of sweet rum. Flavors are at once independent and unified, but, if you take too long to drink it, as I did, everything converges and then fades in the melted ice. 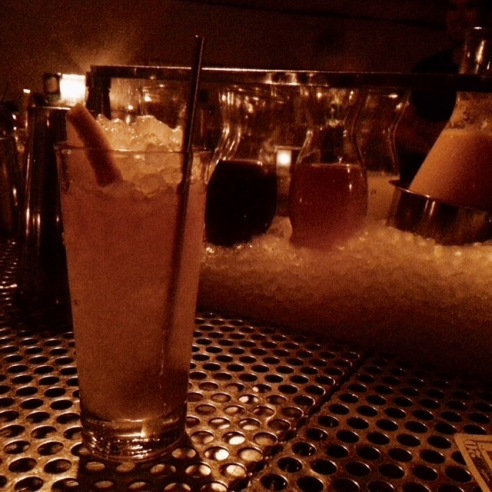 Although the space is dark, I would have thought I’d feel more comfortable alone, but I’m feeling a little conspicuous by myself, a way I don’t normally feel when unattended. There are two or three guys standing at the bar. I’m sitting off to the side, nearest the covered piano. I turn around. They’re all looking at me, probably wondering why I’m alone. I alternate between texting Michelle in Texas and skimming views of the bartender.

It’s a quite night and the vibe here among staff is friendly, professional. When a few different couples come in, I offer my seat–one of two ideal barstools up front–to one couple, and take up a spot at the standing bar. My second drink is Bartender’s Choice, with amaro as the only direction. “The bitter the better,” I say.

He pauses to consider this. “I got you,” he says.

A man slides in beside me, gasping an apology to his date. “I walked passed this place like three times,” he says. So that still happens, I think. The unassuming facade still eludes first timers (to be fair, tonight there’s no doorman or queue).

Although I am watching the bartender, my cocktail seems to appear fully formed–I somehow miss how it happens. The drink–he puts it down in front of me, a simple thing in a single rocks with a wide citrus peel–is gin, cynar, sherry. “Remember the Alimony,” he says it’s called. “If you hate it, let me know.” He says this to me, as he had just said to the couple beside me. At the bar, everything is open-ended here, a conversation.

The first taste makes me smile. I love the oxidized, nutty quality of the sherry, balanced by the cynar and gin. It’s first bitter and a bit savory, solid.  This is worth relishing. The cocktail culminates halfway through, easing at the finish. It’s delicious.

“I’ve been on a sherry cocktail kick lately,” I tell him.

“So I picked the right thing.”

When I ask for my check, he says, “Do a shot with me.” He deliberates on what we’ll have, and reaches for the cynar. We clink glasses. He touches the bottom of his glass to the bar, as I do. It’s something my friends do compulsively back home in Savannah, but I don’t see it much in New York.

“I don’t know,” he says. “To being a tall, beautiful woman alone at the bar.”

I smile. Little Branch is a place for romance, or flirtation, or just a little sweet talk.

We introduce ourselves, but this is all that happens.